When the pandemic abruptly shut down all theatre, TV and film productions in New York City in 2020, Ani Djirdjirian found herself at a crossroads. Although his undergraduate acting degree has already landed him acting jobs and sketches on Late Night with Seth Myersshe found that her work had completely dried up.

But while the acting scene was quiet in New York, things were anything but calm in Armenia, where Djirdjirian’s family is from. In September 2020, a war broke out between Armenia and Azerbaijan over the territory of Nagorno-Karabakh, a semi-autonomous state populated by ethnic Armenians but located within the internationally recognized borders of Azerbaijan.

The region, which was once part of the Soviet Union, has been a source of conflict since 1988, when residents declared independence from Azerbaijan and allegiance to Armenia. Fighting in the September 2020 war lasted 44 days and claimed nearly 7,000 lives before a ceasefire was declared.

Ani Djirdjirian at the Report the Truth protest in Manhattan in 2020.

Djirdjirian joined members of the Armenian diaspora in New York to support civilians and fighters in Armenia and draw attention to their plight, which has been documented by the Genocide Watch group. In addition to shipping supplies to Armenians, she helped organize multiple protests, including the “Report the Truth” march, which began at NBC’s Rockefeller Center studios and ended at the studios of ABC at Lincoln Center, where organizers held a three-hour rally.

She has also enrolled in Fordham’s Graduate School of Service (GSS) and in December will graduate with a master’s degree in social work. In addition to sounding the alarm about the plight of Armenians, Djirdjirian now hopes to address the mental health needs of the diaspora.

“In 2020, we were doing all of these things, and unfortunately we weren’t getting any media attention. A lot of us in the community had burned out. Our mental health wasn’t good, our physical health wasn’t good. We didn’t sleep, we didn’t eat and we were still expected to go about our day as if our people weren’t being murdered,” she said.

“So I said, ‘I need to help in a more official capacity.’ If that means I need to get my Masters in Social Work and learn some skills that I can apply to this situation, then that’s what I need to do.

In September this year, Azerbaijani forces attacked Armenia and crossed the internationally recognized border between the two countries for the first time. A ceasefire was declared on October 7, but the peace is fragile. Armenia belongs to an umbrella alliance overseen by Russia, but reports have indicated that Russian leaders’ preoccupation with its war with Ukraine could steer them away from other arrangements, such as those in Armenia.

To complicate matters further, Azerbaijan receives support from Turkey, with whose people it shares ethnic ties. Although Turkey is an ally of the United States and a member of NATO, the United States government sided with Armenia regarding the so-called Ottoman-era Armenian Genocide. This event, which took place at the beginning of the 20th century and resulted in the death or deportation of approximately 1.5 million Armenians, occurred when Turkey was the seat of what was then the Ottoman Empire. and is recognized by the White House each April 24.

On September 22, US House Speaker Nancy Pelosi visited Armenia to show her support for the country. Djirdjirian said she finds this encouraging and said she hopes it will lead to pressure to reduce the aid the United States is currently giving to Azerbaijan.

“It definitely gives me hope, because not only did Pelosi go to Armenia, but she made a very clear statement pointing to Azerbaijan as the aggressor who must roll back their offensive. This is the first time in history that someone from the United States makes that distinction very clear,” she said. 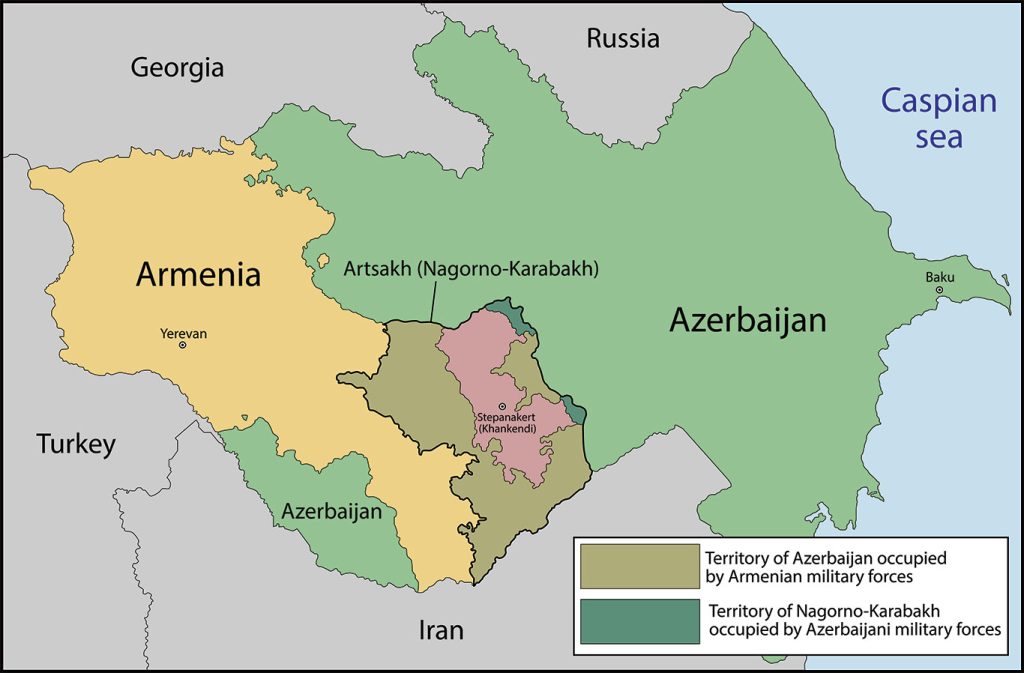 Nagorno-Karabakh, a semi-autonomous state that has been a source of conflict since 1988, when residents declared independence from Azerbaijan and allegiance to Armenia

Get the tools to help others

At Fordham, Djirdjirian found the tools she needed to influence policy through courses such as International Social Development and Capacity Building, which she took with Marciana Popescu, Ph.D., and her internship on the land at the Goddard Riverside Community Center, which is two blocks away. away from the Lincoln Center campus.

Popescu, who works extensively on behalf of asylum seekers, said one of the goals of GSS is to train students to think systemically and consider all factors contributing to complex issues. The situation in Armenia was a complex emergency with multiple possible crises, and that was even before the COVID pandemic, she said.

“Is Ani ready?” Yes. Does she have a lot to learn to really be instrumental in the work she wants to do? Absolutely. But she came across in my class as someone who realizes she has a lot to learn, she’s a good listener, and she’s good at networking and identifying people and groups who can support her in her endeavours.” she declared.

Popescu noted that when she was still a student, her mentor told her that the best social workers “come through the client’s door”, just as Djirdjirian will if she works directly with people affected by crisis after graduation. of his degree.

“The caveat is that when you walk through the client door, you really have to deal with your own trauma; otherwise, you will be triggered by the trauma of others,” she said.

“You don’t have to be the customer, but when your family has been discriminated against, you understand it and if you decide to find a way to fix it for your family and beyond, you become a student. graduate much more capable.”

Djirdjirian is right to focus on how collective trauma can be transmitted across generations, given Armenia’s history, Popescu said.

“When I think of the displacement that the Armenian population has had to deal with, you have people scattered across the world, taking with them traumas that they don’t have the resources to deal with,” she said. .

“Let’s say a person identifies a therapist who speaks their language. It means a lot. [But they may] always facing a therapist who has absolutely no understanding of the trauma they are carrying or the experience of conflict and displacement they have been through. This is what happens with displaced and traumatized populations, where generations after generations carry that trauma with them, and now they bring it into a new context.

Connect to the international community

At the Goddard Riverside Community Center, where Djirdjirian, Susan Matloff-Nieves, vice president for innovation and justice, said she recognized early on that Djirdjirian would benefit as much from her organization’s international connections as the International Federation of colonies (ISF) that it would. to work on local issues, such as a voting campaign and with youth and young adults. 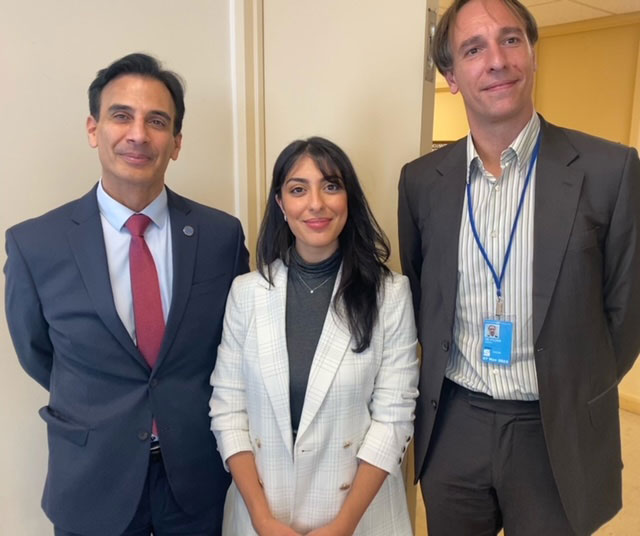 Ani Djirdjirian with staff members of the Office of the United Nations High Commissioner for Human Rights Craig Mokhiber and Nenad Vasic.

She put Djirdjirian in touch with Bobbi Nassar, an IFS member who is co-chair of the UN NGO Committee on Human Rights. Through Nassar, Djirdjirian learns how change happens at the institutional level, Matloff-Nieves said. On October 27, for example, Djirdjirian presented a briefing on Armenia’s status to the Office of the United Nations High Commissioner for Human Rights in New York and the Office for Disarmament Affairs.

Djirdjirian is realistic about the challenges ahead. When asked to describe Armenia’s fate in a few words, she referred to the philosophy of Pan-Turkism, the aim of which is to unite all Turkic peoples, such as those of Turkey and Azerbaijan. Armenia, whose people are not Turkish, is caught between the two, and Djirdjirian fears that because Armenians have already been victims of genocide, the current conflict will once again spiral out of control as Turkish governments and Azerbaijanis strive to unify their peoples.

She plans to continue defending the Armenians and hopes to combine her new skills with those she had before coming to Fordham.

“If I can take this knowledge of human rights and spread the word through my art, whether it’s through writing, music, or creating a documentary, or some kind of campaign that’s going to move folks, I think that’s what I have to do,” she said. .

“I don’t know what it’s going to be like, but I trust he will reveal himself to me through this work and just over time. I know that when the time comes, something beautiful will happen by marrying these two.

(credit: BrAt82 / Adobe Stock) Social Work England has defended its impartiality and commitment to human rights, and called for further discussion about the use of social media by social workers, after warning a practitioner about posts he concluded as discriminatory against transgender people. The case, about a social worker who shared dozens of posts […]

The need for knowledge among practitioners and the lack of an academic knowledge base for specifically collective social work arrangements in the Netherlands was the reason why Anouk de Koning, Femke Kaulingfreks and Maartje van der Woude started working on a Dutch research program (NWA) request for research on social resilience more than two years […]

By Sri Krishnamurti Rachael Mario is not just any woman, she is special in that she hails from the idyllic island of Rotuma in the South Pacific. And it’s her love for social work that she hopes will propel her and her Roskill Community Voice and City Vision team to the Mt Roskill Board of […]